Gustation, more commonly known as taste, is the sensory detection of food on the tongue. It refers to what is detected by the taste cells located on the front and back of the tongue and on the sides, back and roof of the mouth.

Your taste buds are capable of more than you think; they can help build a recipe from scratch or fix one that’s gone awry. When you eat, your taste buds bind with molecules from the food you’re eating. They then send signals to your brain, which recognizes five basic tastes: salty, bitter, sweet, sour and umami.

Making delicious food is all about balancing these tastes. At Fresh Prep, our culinary experts ensure the right balance of all five in every recipe. In this article, you’ll learn the importance of balance when it comes to the five tastes. As it turns out, everything you need to know about balancing flavours is already right on the tip of your tongue.

We don’t often think of sweetness when making savoury dishes, but sweetness is needed to balance other flavours and make a dish more palatable. Sweetness or sugar can round out the salty and sour flavours in a dish. This is why we often see sugar added to tomato-based sauces, as a means to reduce the acidity and sourness of tomatoes. Another example is the inclusion of a sweetening agent such as honey or maple syrup in a salad dressing to balance out the acidity of the vinegar or lemon juice. Getting the flavour of a dish right is often a balancing act to ensure that no single flavour dominates over the others.

It’s not often that you hear a good dish being described as sour tasting. And again, this is because a flavourful dish will not have a single flavour dominating. Sour flavours are typically added through acidic ingredients – think vinegars or lemon/lime juice. Similar to salt, sour or acidic flavours compete with bitter flavours in foods, reducing our perception of them and brightening other flavours. We often find when a dish is missing “brightness’ or “oomph” it’s often lacking an acidic element. This is typically why acidic ingredients are added to dishes that are a bit fatty or heavy. For example, adding lime juice to a crema sauce, or adding squirting lemon juice over your salmon.

Arguably the most important ingredient in any kitchen, salt is a flavour enhancer. It makes buttery popcorn more addictive, a grilled steak more delicious, a sauce more potent. Salt suppresses bitter flavours, and even makes sweet foods taste sweeter. Humans are hard-wired to crave salt because we need it to survive. We use salt religiously in many different ways, and find it in a variety of ingredients: soy sauce, fish sauce, parmesan cheese, and stock cubes, for example. When used properly, salt will enhance all of the five tastes. 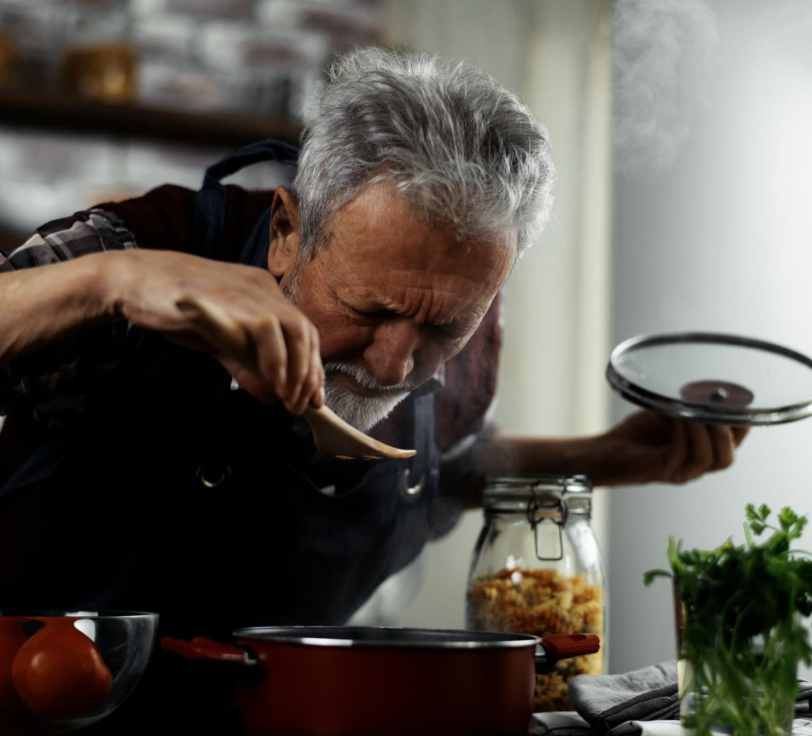 Bitter has a bad reputation. Its flavour is often thought of as a negative, but its impact on an overall dish can be grounding or balancing. The ability to detect bitterness is believed to have evolved as a way to protect us from toxic plants and other substances, which often taste bitter. Some are more sensitive to bitter foods than others, finding them to be disagreeable, but historically bitter foods have been used for their medicinal effect. Tasting bitter food actually helps to stimulate our innate digestive processes. Leafy green vegetables have prominent bitter flavours but we are sure to balance them out in our recipes using salty, sweet or sour ingredients.

Umami is a Japanese word that translates to ‘pleasant, savoury taste’. It can be characterized by the taste of broth, cooked meats, cheese, soy sauce, fish, mushrooms, fermented products and more. Often confused with saltiness, umami is a taste category unto its own, contributing a depth to food that salt can’t necessarily provide by itself. We incorporate umami to bring a balance and depth of flavour to our recipes. Some of the ways we do this include adding stock cubes to our soups and curries, searing our meats before adding them to soups and putting miso in our dressings and sauces.

Many believe that heat is one of the five flavours, but technically it’s not. The heat that comes from peppers, capsaicin, is actually pain on your tongue. It mimics something very hot against the tongue, much like menthol mimics the sensation of something cool. Spicy foods are most typical in regions with hot climates. While this may seem counterintuitive, spicy food causes people to sweat and in turn cool down faster. We love adding heat to a dish along with sour, salty, sweet, and bitter elements for a rounded flavour profile. Common ways to add heat to dishes include red pepper flakes, hot sauces, and ground or fresh chili peppers.

Fat contributes to both the flavour and texture of food. It brings richness, and deepens and enhances flavours. Think sour cream on potatoes, cream and cheese in pasta sauces, or toasted spices in warm oil. Fat can be heated to a very high temperature, to add crispness and the golden brown colour we like so much. We do this, for example, by heating oil before adding meats and vegetables into a skillet, tossing vegetables in oil before roasting them in the oven and sprinkling cheese on top of dishes before broiling.

Top tips to easily go green in your kitchen

Welcome to the Fresh Prep Blog

If you're new to Fresh Prep, get 3 free meals on your first order with code: BLOG3FREE